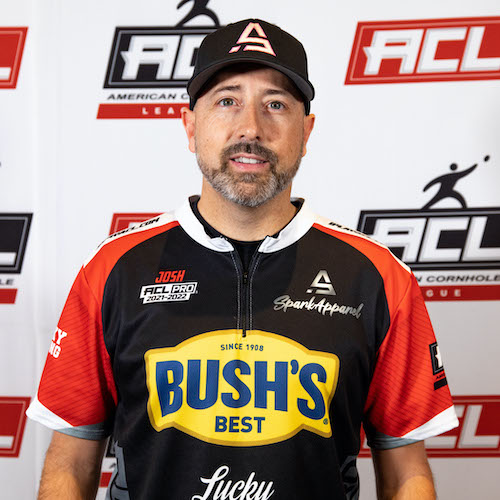 Josh Thielen enters his first season as an ACL pro, finishing the 2020-21 ACL season ranked first in the state of California. His kind demeanor can be deceiving as on the boards, he is better known as The Beast given his ability to pour bags into the hole. Outside of cornhole, Josh enjoys traveling, cooking, and spending time with his wife (Maren) and two kids (Vincent and Olivia). He resides in Livermore, CA.

Q: How did you start in cornhole?

A: I started by casually throwing in my neighborhood with family and friends. I officially caught the cornhole bug during a cornhole tournament at a local brewery, where my neighbor Jon Dillon and I captured 1st place. I landed my first-ever sponsor that same day as my neighbor Marc generously paid for our cold beverages as we played.

Q: What year did you start playing cornhole?

Q: Are you right or left-handed?

Q: What motivates you to play cornhole?

A: The social/community aspect of cornhole is a massive part of the sport. On the boards, I am fiercely competitive and am extremely motivated to win.

Q: Who is your tournament doubles partner?

Q: What is your local cornhole club and where?

Q: What is your favorite Lucky Bag?

Q: How has LuckyBags helped and supported you?

A: Lucky Bags has been my first professional sponsor since I qualified for ACL pro in August 2021. Mike does a tremendous job of pulling Team Lucky Bags together, creating a family-like environment. Without Lucky Bags support, it would be extremely challenging for me to compete at all the events I am going to attend this ACL season. Beyond the sponsorship, Mike and the Lucky Bags team are very supportive and it’s a pleasure to be a part of such a strong team.

Q: Any advice or motivational statements you would want to give your fans and players?

A: Competing in a professional sport has always been a dream of mine, and it’s an honor to be a part of Team Lucky Bags for my rookie ACL Pro season.